The Water Balance Model (WBM) was first developed at the University of New Hampshire, Durham, by Charles J. Vorosmarty in the 1990s. Since then, it has branched into a family of models designed for various applications in different spatial  scale. WBM is a global-scale, gridded model that simulates both the vertical exchange of water between the ground and the atmosphere, and the horizontal transport of water through runoff and stream networks. The original WBM and its descendants predict spatially and temporally varying components of the hydrological cycle and multi constituent water quality variables. The more recent development of WBM expanded its modeling framework to many anthropogenic interactions with hydrological cycle such as coupling biogeochemical (Wollheim et al., 2008a), hydro-infrastructure engineering (Wisser et al., 2013; Wisser et al., 2008), interbasin water transfer (Zaveri et al., 2016), irrigation (Wisser et al., 2010; Grogan, 2016), agricultural land use (Grogan et al., 2017), water use regulations (Murphy et al., 2014), and many other human impacts on surface water hydrology (Vorosmarty et al., 2010).  Further documentation for WBM can be found in (Grogan, 2016). Capabilities of the current version of the model include predictions of river discharge, water temperature, dissolved nitrogen, the impacts of irrigation,  and the distortion of hydrographs through the operation of reservoirs. Other important features include snowmelt runoff, surface runoff due to impervious surfaces, and a series of physically-based evapotranspiration functions dependent on air temperature, vapor pressure, wind speed, and solar radiation. The WBM model family has been applied for a number of research projects at scales varying from local watersheds (Wollheim et al. 2008b, Stewart 2009) to the global system of rivers. Applications include quantifying regional impacts of irrigation on climate (Douglas et al., 2006), distribution of land use and hydrologic vulnerability (Douglas et al., 2007), magnitude of fluvial sediment trapping by reservoirs (Vorosmarty et al. 2003, Syvitzki et al., 2005), distribution of irrigation water requirements (Wisser et al. 2008) and its impact on the water cycle (Wisser et al. 2010, Fekete et al., 2010), the significance of small reservoirs as a means of rainwater harvesting and storage for irrigation(Wisser et al. 2009); global scale modeling of isotopic signatures in the hydrologic cycle (Fekete et al., 2006), and global estimate of N removal by aquatic systems (Wollheim et al. 2008b )

The original version of WBM (Vorosmarty et al. 1998) was one of the first macroscale hydrological models and forms the basis of all its descendents.

WBMplus (Wisser et al. 2010) extends WBM by explicitly accounting for the effects of irrigation and reservoirs on the hydrological cycle. Furhtermore, it implements an improved snow melt routine, a daily time step, and a Muskingum-Cunge flood routing scheme. WBMplus is implemented in the Framework for Aquatic Modeling of the Earth System (FrAMES, Wollheim et al. 2008a). FrAMES is a grid-based, spatially distributed watershed modeling tool that allows application of biogeophysical processes over a wide range of resolutions. The modularity of FrAMES lends itself to staging and testing of new geospatial data sets as well as computer model functions depicting individual hydrologic or biogeochemical processes.

WBMplus uses a tiling approach to partition each grid cell into an irrigated and non-irrigated fraction. The irrigated part can be subdivided into any number of parts representing different crops with different physiological properties and hence different water requirements (see Figure). The estimated irrigation water demand for the entire grid cell is met by abstracting water from small reservoirs (if available), the runoff pool, representing groundwater, or river corridor discharge from rivers flowing in the same grid cell. If the demand is higher than those three sources combined, irrigation water is still applied with water taken from a virtual pool, representing abstractions from fossil groundwater that is not connected to the hydrological cycle (see Figure).

The estimated irrigation water demand for the entire grid cell can be met my abstracting water from small reservoirs (if available), the runoff pool, representing groundwater, or river corridor discharge from rivers flowing the same grid cell. If the demand is higher than those three sources combined irrigation water is still applied with water taken from a virtual pool, representing abstactions from fossil groundwater that is not connected to the hydrological cycle (see Figure).

The current version of the model computes water release from large reservoirs (defined at a point along the river network) as a function of inflow to the reservoir, mean annual inflow, current storage, and maximum capacity. The flexible and modular structure of the software framework allows for quick and easy implementation of other reservoir operation policies if more detailed data is available.

The WBMplus Regional model was developed specifically for watershed-scale analyses and incorporates urban land features that are less important at larger spatial scales. This model extends the WBMplus version to combine the previous functionality of water withdrawals, and reservoir routing with hydrological processes associated with impervious surfaces, lawns, and wetland storage. In this update, a fraction of runoff from impervious surfaces is routed directly to receiving waters during each storm event and is based on previous studies of effective impervious surfaces in the basin (Pellerin et al. 2007). Lawns and impervious surfaces decrease the available water capacity in soils based on their spatial coverage and a priori estimates for lawn rooting depths. A wetland detention pool captures and slowly releases surface runoff based on a calibrated parameter. Total runoff from each grid cell is the sum of storm, surface, and groundwater release.

PWBM (Rawlins et al., 2003) was one the first macroscale hydrological models that explictely accounted for the effects of seasonally of permanently frozen soil on components of the hydrological cycle. More sophisticated approach to take into account   permafrost influences on hydrological processes in cold region was based on coupling of simplified version of WBM with permafrost model developed at the UAF Geophysical Institute Permafrost Laboratory (GIPL) (Rawlins et al, 2013).

A nitrogen (N) module has been combined with the WBM/WTM to predict N exports from watersheds, in-channel denitrification, and resulting N concentrations throughout the river network (Wollheim et al. 2008a). The model accounts for both point and nonpoint sources of N inputs to the river network. Nonpoint sources are a function of land use type and runoff conditions. In-channel denitrification is a function of discharge, channel characteristics, and biological uptake parameters.

WBM was recently completely redesigned to accommodate new computational features and extended scientific functionalities under the same physical formulations of natural hydrological processes presented in earlier versions of the model. General diagram of WBM is shown on the figure. 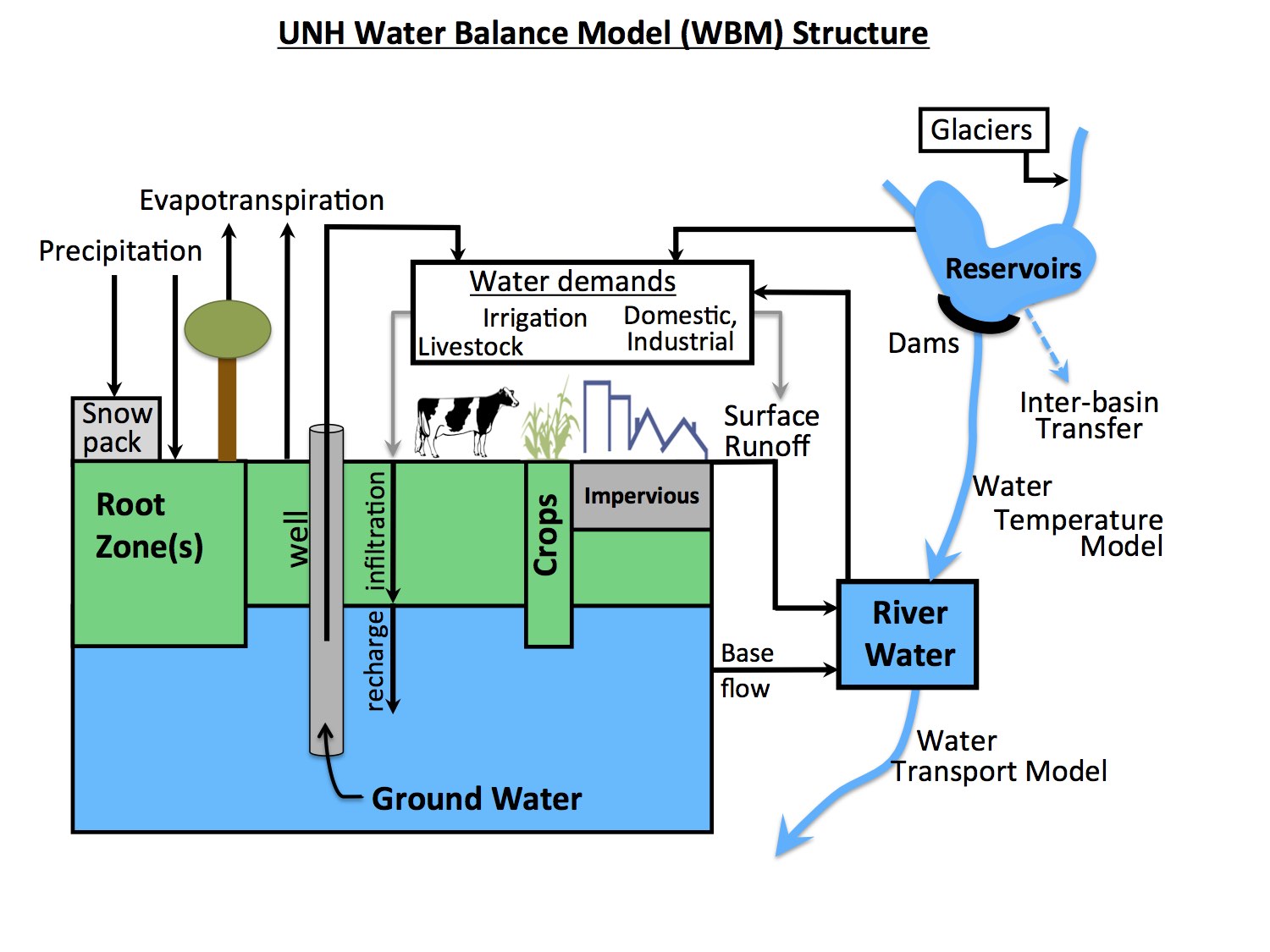